The Nier: Automata anime has a firm release date and release trailer 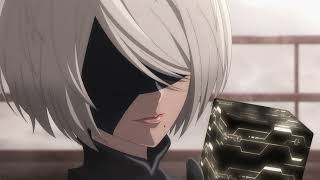 Nier: Automata’s anime adaptation will come on January 7th, 2023, and to celebrate a nice new trailer’s out and about showing off protagonists 2B and 9S as they do apocalyptic robot stuff in their nice apocalyptic robot future. We’ve known it was coming in January (opens in new tab) for some time, but this is the first hard date we’ve got.

The trailer makes it look like a faithful retelling of at least the first round of Nier: Automata’s storyline. However, we already know that it’s a series rife with alternate endings and secrets, some of which took years for the playerbase to discover—the last significant one cropped up four years after release. (opens in new tab) All of that’s to say I very much doubt we’ll see this series sticking to the endings as established. Expect some wildly metafictional twist or deviation.

Like halfway through the series they’ll start making the game and then send the code back in time to 2017 so that Yoko Taro and Platinum Games can take credit for it. Just spitballing here.

It looks like the anime will be coming to streaming platform Crunchyroll worldwide, as well as to Hulu and Amazon Prime in a lot of localities. Aniplex says it’s “scheduled to broadcast in over 160 countries and regions.”

Nier: Automata is one of the more critically acclaimed games of the past decade, a 2017 release that was pretty well-received at the time but has grown a cult following in the years since. It’s set on a ravaged earth that humanity has fled, with the last survivors of our species living in space and sending soldiers to the surface to fight. Our Tom Senior called it one of the saddest games ever made (opens in new tab) at the time.

“Humanity has been driven from the Earth by mechanical beings from another world. In a final effort to take back the planet, the human resistance sends a force of android soldiers to destroy the invaders. Now, a war between machines and androids rages on… A war that could soon unveil a long-forgotten truth of the world,” says the official game description.

Anyway, get ready for an exciting release in 2023. It’ll be just one more representation of why people love Nier so much. (opens in new tab) Maybe we’ll even get more 2B skins out of it, since you can already play as her in basically everything. (opens in new tab)