The boat came ashore in Ujong Pie village, a day after a wooden vessel with 57 Rohingya landed in another part of Aceh.

At least 185 Rohingya refugees have landed in Indonesia’s northernmost province of Aceh after drifting at sea for weeks, police and rights activists said.

The boat came ashore in Ujong Pie village on Monday, a day after a wooden vessel with 57 Rohingya people landed in another part of Aceh on Christmas Day.

“The group consists of 83 adult males, 70 adult women and 32 children,” said Aceh police spokesman Winardy, who goes by one name, in a statement.

A video shared by a local resident showed the Rohingya, including children, lying on the beach, visibly weak and exhausted.

The UN refugee agency UNHCR has said the number of Rohingya undertaking such dangerous journeys by boat had increased six-fold this year, compared with 2021. It urged governments in the region to move swiftly to rescue them.

On Tuesday, the UN said at least 20 Rohingya have died at sea in recent weeks. 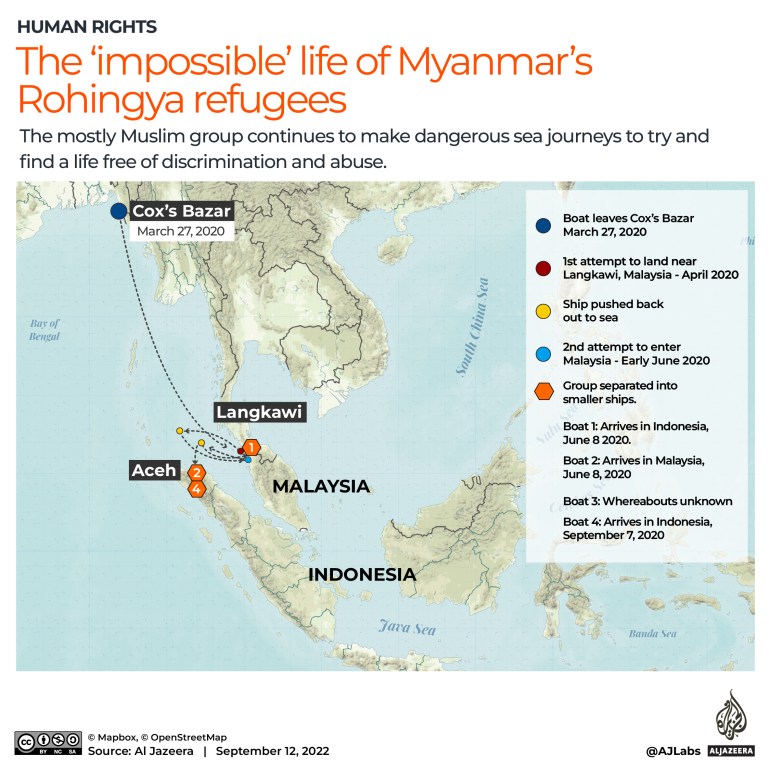 More than one million Rohingya Muslims have fled persecution in Buddhist-majority Myanmar since 2017, most of them still languishing in dozens of refugee camps in neighbouring Bangladesh.

Rights groups have recorded a significant increase in the number leaving the camps, from about 500 last year to an estimated 2,400 this year. It is not clear what is driving the larger exodus.

Some activists believe the lifting of COVID restrictions around Southeast Asia, a favoured destination for the Rohingya, could be a factor.

Earlier this month, Sri Lanka’s navy rescued 104 Rohingya, while Thai authorities saved six others who were found clinging to a floating water tank.

What are the legal consequences of Israel’s occupation? | Israel-Palestine conflict